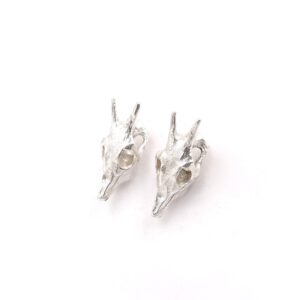 The Myotragus Balearicus is the only known domestic and extinct species in the world. The most recent testimonies of their presence in Mallorca date from 2030-170 BC.

It was discovered in 1909 by paleontologist Dorothea Bate. It is the largest mammal on the islands, similar to the gazelle, which belonged to the antelope group.

The name of Myotragus comes from the Greek and means “goat-rat”. It is estimated that this mammal arrived in Mallorca when the islands were still attached to the continental shelf, more than five million years ago.

Once the islands were separated from the mainland, their ancestors became isolated, found no major predators to threaten them, and evolved differently from those outside the islands, adapting perfectly to the insular habitat.

Both males and females had two small horns, fine and sharp, which, starting from the forehead, elongated towards the back.

The Myotragus Balearicus was rather small in size, about 50 centimeters tall and about 10-12 kilos in weight.

In the absence of other predators in his environment, his locomotor system adapted to running very little, his movements slowed down and he lost the ability to jump.

His ocular system underwent variations, the position of his eyes was frontal, he always looked forward, since in the absence of other competitors, he did not need to take precautions of possible dangers that could come from the sides.

All these morphological changes were negative for their evolution, since they facilitated their capture by man when he colonized the Balearic Islands.

The remains of this animal have been found next to human objects or bones, which shows that man lived with this animal and domesticated it, surely, extinct it from the islands to feed.

In May 2010 a group of paleontologists carried out a new and fruitful expedition in the Cova des Pas de Vallgornera (Llucmajor),in which the 65 kilometers surveyed have already been reached, discovering in an isolated gallery called «Tragus» the oldest preserved complete skeleton of Myotragus, about two million years old, belonging to a missing link in the evolutionary chain of the «goat -rata» between Myotragus antiquus and Myotragus kopperi.